The Parklane Gallery Annual Miniature Show opens tomorrow, April 30! Two of my paintings will be on display and for sale in the show along with many other miniature artworks, some from such well-known miniature artists as Wes and Rachelle Siegrist. Many other paintings by gallery artists will also be on display and for sale that are not in the show.

This is my first time in the show so I don't know how it's going to go. Although the show runs until June 2, from what I've heard, many of the paintings sell quickly the first day! So if you are interested in buying any of these miniatures get down there sooner rather than later. If you're not in the area you can still purchase paintings online but online sales won't start until the second day of the show, on May 1.

If you're in the area on May 10 stop by for the reception and awards starting at 6:00PM. There will be wine, snacks, artists to chat with and, of course, lots of art to see!
Posted by Crista Forest No comments:

I've been out of sorts, not feeling so well, so I haven't gotten a lot of painting done the last few days. Feeling better today so I was able to do a little painting and finish up a miniature painting of a great blue heron I photographed at Juanita Bay Park a few months back.

I'm trying to get some more miniatures finished up before the Parklane Gallery Annual Miniature Show next week. If you're in the area, please come by and check out the show! This is my first time participating in the show but I've been told by other artists that it's a great show. 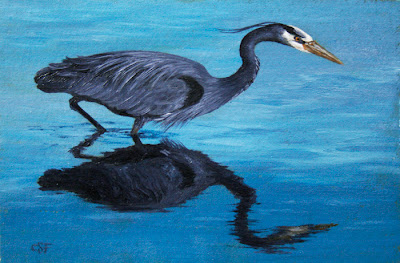 Oil on multimedia board
Posted by Crista Forest No comments:

At the SCBWI annual conference last weekend I attended a Sophie Blackall "breakout session" which was a bit more of a workshop than other breakout sessions they had. Rather than watching Powerpoint Presentations like we did in most sessions, Sophie actually had us doing drawing exercises.

In one of the exercises she had us draw a child riding an animal. Simple enough, right? But, of course, I didn't want to do the ordinary and have a child riding a pony. So I put the child on a giraffe! We had just 3 minutes to draw it. Here's the result: 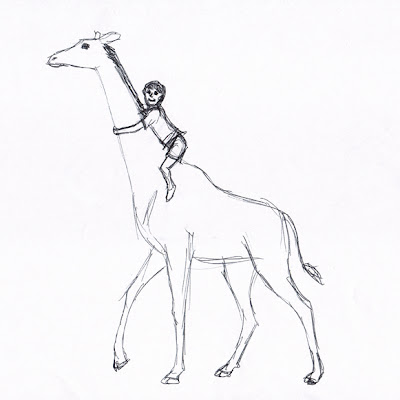 But, of course, I didn't know what the next part of the exercise was, or I might have considered a different animal!

Next, she said, now take 3 minutes to draw that same animal riding the child! Oh my! How do I fit a large animal like a giraffe on top of a child!?

Well, it was actually rather funny: 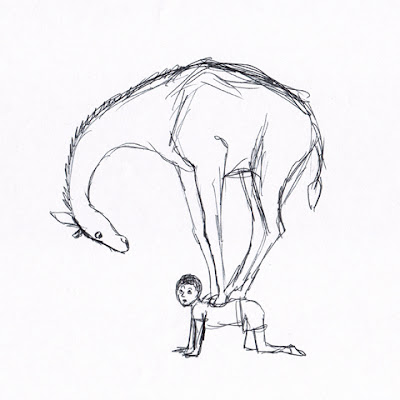 Notice they both look a bit bewildered. I was!

Next Sophie said, draw that same image, but this time draw it in only 30 seconds. 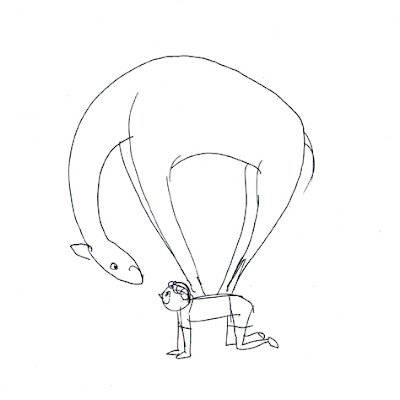 It's starting to look like the child has a giraffe for a parachute! This time I decided to give them a more cheerful expression. Having a parachute, particularly if you are at risk of falling, is a happy thought, after all. And, for a child, it's especially good if your parachute happens to look like a happy giraffe!

Well, you can see how silly things got here. But that was what made the exercise so fun! I don't think I would ever have thought of a giraffe-shaped parachute on the back of a child before! LOL


Posted by Crista Forest No comments:

Sophie Blackall was a keynote speaker at the Western Washington SCBWI annual conference I attended today. Not only was she a funny and entertaining speaker, but I quickly came to admire her work. As she joked, a wombat is a "shapeless" creature so, when she had to illustrate a book about wombats, it was a challenge to distinguish the different wombat characters in the book. It's true! A wombat is not a particularly interesting animal in its physical appearance. Giving individual wombats in the story their own unique personalities would not be an easy task. But she managed to do it!
Check out her book, Wombat Walkabout. 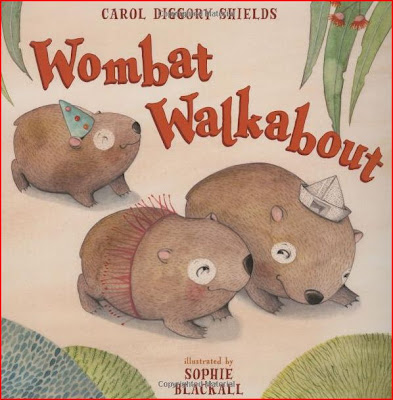 I finished a new miniature painting of a Siberian tiger yesterday. It's only 4"x6", oil on multimedia board. I plan to enter it and the previous raccoon miniature in the Parklane Gallery Miniature Show next week. Wish me luck! 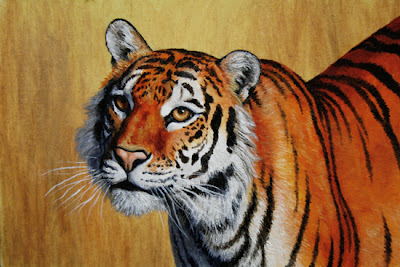 Here's a new miniature painting of a baby raccoon I just finished today.

Sheesh, these people are picky! I personally consider anything less than 8"x10" to be pretty darn small. But, I'm not the miniature expert so what do I know? ;)

Anyway, here's the latest "true" miniature artwork of a baby raccoon. I painted this from a photo I took at the Triple D Game Farm in Kalispell, Montana a few years ago. 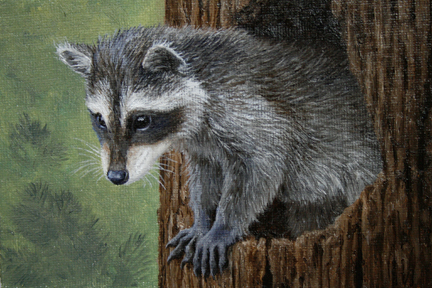 I recently did a small horse portrait from a photo I took at the Hollywood Hill Saddle Club events last summer. I love the expression on this beautiful horse, and I love the way the lighting falls across his face, so I had to paint it.

This is a true mini painting, just 4"x6" in size. I tried to get in a lot of detail so this painting actually took longer to do than some of my 5"x7" and 6"x6" paintings. You'd think a smaller painting would take less time but, in reality, it takes longer to get detail into such a small space! 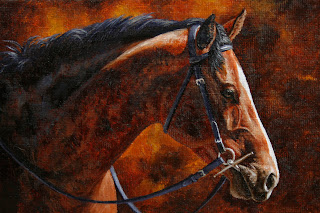 As mentioned in a previous post of my cougar in Zion National Park painting, there are several animals in the scene besides the cougar. Some are obvious, some are somewhat camouflaged. They are pretty easy to find but, just in case you missed one, I wanted to post an image with all the animals pointed out. Here they are! (Click the image to see a larger version) 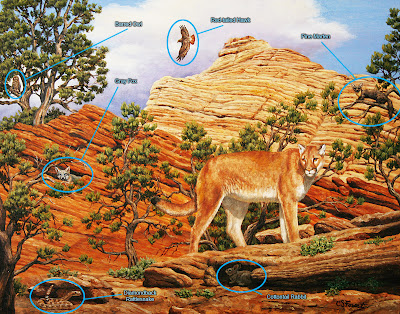 I've added some new jewelry selections to the Tigers section of my Zazzle store featuring my painting of a white tiger. His crystal blue eyes are perfect for a jewelry setting. :) 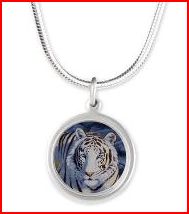 I have a lot of other sections up as well featuring wolves, eagles and more. Not just jewelry either. There are t-shirts, coffee mugs, and even smart phone cases all featuring wildlife art. Many items that would make great gifts for the animal lover in your life!

You can visit my shop here or click one of the links to the right.
Posted by Crista Forest No comments:

I'm happy to announce my artwork is now being displayed in a new gallery, Parklane Gallery in Kirkland, WA. Well, the gallery isn't new. They've actually been around for about 23 years! But it's new for my artwork.

This is exciting to me because it's a local gallery, just a 20 minute drive from where I live in Woodinville, WA. I already have a few paintings in another gallery, Decoys & Wildlife Gallery, but that gallery is clear across the country in Frenchtown, NJ. Being so far away I feel quite detached from the gallery, my art, and the clients. Having artwork in a local gallery means I get to be much more involved. I'll be able to attend gallery shows and artwalks and meet the clientele. I can even do a little painting in the gallery from time to time so people can watch me work if they'd like. 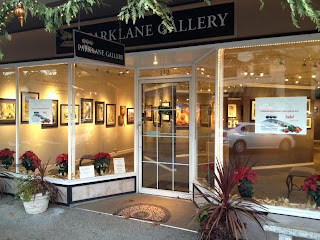 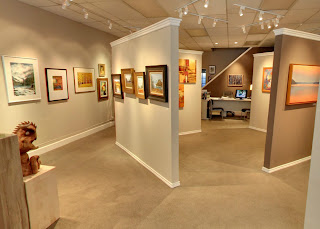 They're hosting an international Miniature Show starting April 30 and ending June 2. I don't have any paintings small enough to qualify yet but I still have a couple weeks left before the deadline so I hope to do a few in time to enter the show. Whether I get paintings in the show or not, be sure to stop in and see it!

The gallery also participates in the Kirkland Art Walk which takes place the second Friday of every month from 6:00-8:00PM. The next one will be in a week, on April 12. There will be free snacks and wine in the gallery, and lots of friendly artists there to meet and chat with about art. There are also several nice restaurants nearby to round out the evening with a nice dinner.

It will be lots of fun, so if you're in the area stop by!
Posted by Crista Forest 1 comment: 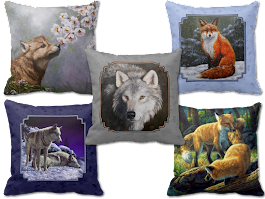 Disclaimer: The author of this blog may earn a referral fee for sales through these Amazon product links from Amazon Associates